Paul didn’t have much contact with his family.  His wife had died a couple of years earlier, and his three kids had grown up and moved away.  He had retired three years ago so he could help care for his wife and hadn’t really kept in touch with anyone from work.  He didn’t really have any friends, preferring to potter around his garden on his own with Lola.  Lola arrived as puppy eight years ago, and she had been a real source of joy to both Paul and his wife, as they both enjoyed taking her out for long walks in the countryside. Paul had recently been diagnosed with advanced lung cancer and was finding it a struggle to walk Lola.  He was also worried what would happen to her when he died, as he’d heard not many people want Staffies. Paul’s vet mentioned that Scampdoodles might be able to put him in touch with a volunteer who could help.

John might seem an unlikely hero to our story.  He suffered with depression and anxiety and hadn’t been able to find work for the last three years.  John often felt lonely since his wife left him and had taken the kids off somewhere else to live.  He missed his family, but really missed the family dog as much as anything.  With the help of Scampdoodles, Paul, Lola and John agreed to meet up for a coffee.  John said “Lola helped break the ice immediately as we chatted about dogs we’ve owned over the years. We also discovered a shared love of gardening. It feels great to be useful and help someone out”. 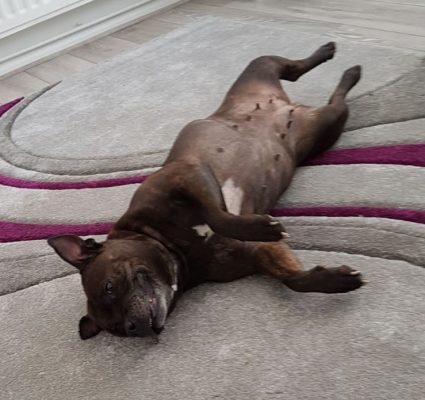 Over the next few months Paul, Lola and John would often go for a little walk together, and all three would potter around Paul’s garden checking out the latest blooms.  Paul said “All three of us have become such good friends. John is fabulous with Lola and a great help keeping my garden nice. It’s great knowing I’ve got a friend I can call whenever I need help”. Paul became very ill very quickly.  He was rushed into hospital and John went to pick up Lola.  She settled easily into John’s home as she already knew him well.  When Paul was moved to the hospice, John and Lola would visit with blooms from the garden.  John said “I’m sure those visits with Lola kept Paul going a little longer.  We both miss our friend but at least we have each other”.

Do you want to get involved and help out? Check out some ways you can help below: